Without a doubt, Pembroke was the hottest town on the South Shore last night.   Limos lined Route 53, and the Dropkick Murphys could be heard outside of Turner’s Yard, the new restaurant owned by Ken Casey, Tim Wakefield, Shawn Thornton, and Taniya Nayak. I had a chance to speak with each of the owners over the course of the evening regarding their thoughts and goals for Turner’s Yard. The celebrities were very generous with their time, mingling  with the crowd, shaking hands and taking pictures.  They were very friendly, which gave the entire evening a great vibe.

Ken Casey and Managing Partner, Brian O’Donnell, had been shopping for restaurant space on the South Shore for a while before 615 Washington Street opened up. O’Donnell’s wife, and part owner of Turner’s Yard, Taniya Nayak of HGTV fame, commented  “I think the secret to success is to open a cool restaurant in the suburbs. There are so many people like us, in their thirties, who want a fun, convenient place to go out –without having to drive into Boston. My husband is really excited about being here. We both grew up on the South Shore, and opening a restaurant here just feels right.” 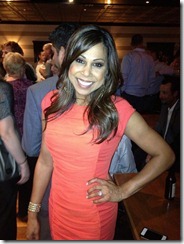 Tim Wakefield, former Red Sox pitcher and part owner of Turner’s Yard  graciously posed for pictures with fan after fan, shaking hands, and accepting congratulations on his newest venture. I asked him what he wanted for Turner’s Yard and he said “ I’m proud to bring this restaurant to a community that truly deserves an excellent place to eat and drink”.

The 6,000-square-foot restaurant was packed with fans, revelers, photographers and celebrities. The enormous square bar was open all night, with appetizers passed early in the evening. This was a soft opening for the restaurant, so the wait staff experienced  a packed Saturday night for the first time.

I asked Executive Chef Eric Bogardus how the menu was coming along. “We really want to do this the right way. There are still some menu items we are perfecting, and we won’t debut them until they are exactly the way we want them.  We want everything to be perfect for our customers,” he said. 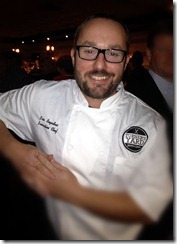 Executive Chef Eric Bogardus was on the short list of 5 chefs considered for the position of White House Chef.

Part owner and Boston Bruins player, Shawn Thornton, was mingling freely with the crowd. When asked how he became connected with Turner’s Yard, he said, “I met Kenny (Casey) a few years ago at a Dropkick Show and we became friends. Kenny knew I wanted to get into the restaurant business, and he approached me about this opportunity. When I heard Wakefield was doing it, and of course Kenny, it was an easy decision. This is a cool place – I would want to hang out here – and that’s what we want to bring to the South Shore.” 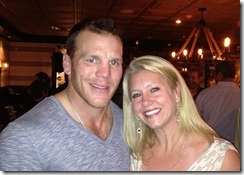 Shawn Thornton and yours truly

There were several other interesting attendees at the Preview Party. Micky Ward, the boxer about whom the movie The Fighter was made, was hanging out with fans, and talking to the band. Mark Wahlberg played Micky in the movie, and in a funny twist of restaurant fate, Mark’s family is building a restaurant empire right down the road in Hingham.  Bobby Orr stopped by the party as well, and hung out with co-owner and Dropkick Murphys frontman Ken Casey.  It was a fabulous night, and it looks like we, on the South Shore, have a solid new pub to visit. 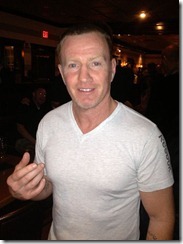 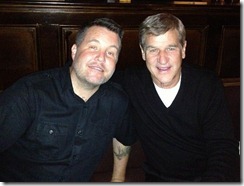