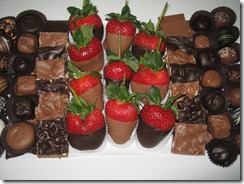 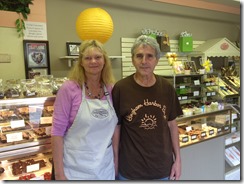 Have you ever met two people who shared a passion so strong that they dedicated their lives to it? Meet Debbie and Dick Puopolo, the much-loved chocolate-makers of Hingham.

Dick Puopolo started making chocolates with his uncle at Lavaggi’s in Weymouth when he was 17. Twenty-five years ago, he opened a store called Puopolo Candies. At that time, his wife Debbie was working as a telemarketing manager at Talbots. Weekends and evenings, she would help her husband in the shop. “Soon I was going in all the time”, says Debbie. “I had a job, two kids, and the chocolate. I had to give something up, so I quit my job at Talbot’s. I was terrified!”

But together, Dick and Debbie were able to create even more quality chocolates, and word was spreading. “People would taste our chocolate, tell their friends, and the friends would come in,” says Debbie. The company’s clientele increased rapidly. “Word of mouth was, and still is, our biggest marketing tool”. Over the years, their store grew, as did their client base. “We still create holiday chocolates for people and corporations that have been ordering from us for 25 years!” says Debbie.

“We have been lucky,” says Debbie. “We had our eye on the space that used to be behind Nona’s, but it wasn’t completely conducive to our plan. So instead, we rented space in our current building at 222 North Street (in Hingham). Six months later, the space we had originally looked at burned to the ground!”

As sales increased, the Puopolos needed to increase their chocolate-making equipment. “When we first started, we only had a chocolate tempering machine,“ says Dick, “which keeps chocolate at the perfect temperature for coating fillings.” For the uninitiated, this machine is also called an enrober. It includes a small chocolate waterfall that each handmade filling passes through to become coated in chocolate. “In the early days,” said Dick, “I would make the fillings myself, hand push them through the enrober, and manually place them on a dipping board to cool. If I filled 30 boards in a day, I was doing really well,” he said, smiling at the memory. “Debbie’s dad made all the dipping boards.” 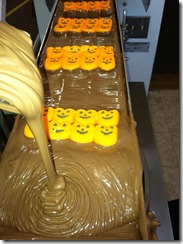 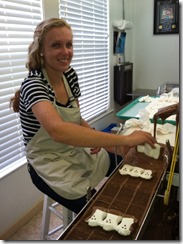 Pumpkins and ghosts, enrobed in chocolate!

Now the Puopolos have a commercial enrobing machine with conveyer belts and a cooling tunnel. Dick still makes all of the fillings by hand, but he is able to automate a lot of the process. Fillings are placed on the machine, which first coats the bottom in chocolate, creating a base. Once the base has cooled around the filling, they are conveyed through the enrober’s continuous curtain of chocolate. The chocolates proceed through the cooling tunnel, which brings them to room temperature. “You need to have a tight seal on the chocolate”, explains Dick, “because the filling will escape through any holes in the shell when it softens again.” “We have the tough job of taste testing all the new ideas,” says Debbie happily.

Once the chocolates have cooled, they are marked. Each design on top of a chocolate indicates what is inside. “Some symbols are universal, but we also have our own. For example, orange-filled chocolates are marked with a star, and buttercream are marked with a B,” says Debbie, pointing out the different symbols in a one-pound box.

If Dick is the candy maker, than Debbie is the designer, marketer, and creative master. “We take many special orders each week”, she says. “We handle a lot of weddings, baby showers, parties, and holiday orders. I created the ballet slipper chocolate bouquet when my kids were taking dance. They became so popular that we now make custom chocolate bouquets for every occasion!” 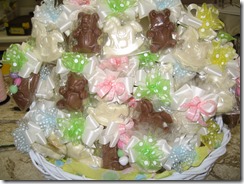 Ten years ago, the Puopolos started experimenting with salt on chocolate and caramel. “It took a while to catch on, but it is extremely popular now”, says Debbie.

One idea that did not take long to attract attention is the chocolate bark. The dark chocolate almond bark is the top seller. Also a favorite is the Hingham Harbor Bark – dark chocolate, dried cranberries, pistachios, walnuts, and sea salt. Then came Sandy Beach Bark – milk chocolate, butter crackle, crushed almonds and sea salt, and Lighthouse Bark – white chocolate with cranberries, roasted pecans, and sea salt. Shipwreck Bark was so named when a Puopolo’s employee saw all the ingredients spread out together – dark chocolate swirled with white chocolate, roasted mini pecans, cranberries, and a touch of sea salt – and proclaimed that it looked like a shipwreck. There is also a special, healthy version of the bark. The chocolate in Healthy Heart bark has a higher cocoa content (72%), and is packed with super foods like goji berries, pistachios, ginger, pumpkin seeds, and blueberries. 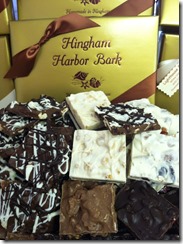 Hingham Harbor Bark started it all!

“We developed Hingham Harbor Bark & Hingham Harbor Sweets as a way to give back to our loyal customers, and the amazing town of Hingham,” says Deb. “Our chocolate boxes will soon depict historic sites around town. That way, no matter where they are sold, everyone will know they are ‘homemade in Hingham’.”

While Puopolo Candies are homemade at the Hingham shop, they are sold in many places. Locally, you can pick up your favorite chocolates at Local Vines & Gourmet in Cohasset, Plymouth Bay Winery in Plymouth, and Linden Ponds gift shop, and The Fruit Center, both in Hingham. There has been some exciting out-of-state news as well. Wentworth by the Sea Hotel and Spa, in New Castle, NH, will soon be selling the Puopolo’s chocolate. As Puopolo Candies moves into the next 25 years, the plan is to expand into gift shops all around the country.

When asked about her favorite part of the last 25 years, Deb replied “I love our customers, and I love the never ending potential of chocolate!”