You may already know this man!

Six weeks ago, Riva Restaurant in Scituate was purchased by new owners. Are they big investors from out of town, or perhaps a major chain? Deep breaths. No. In fact, the South Shore could not be luckier. The new owners are Executive Chef Michael Tondorf, who has been Riva’s chef for the past three years, and his sister Kara Tondorf. “It has always been our dream to have a restaurant together,” says Tondorf of himself and his sister. “Kara runs front of house and I am Chef/Owner.”

Tondorf is a Scituate native and started his cooking career at Rizzo’s, the restaurant that once resided where Riva is now. He started there in high school, and there’s a wooden beam in the kitchen with his initials – MT ’99 – to prove it. 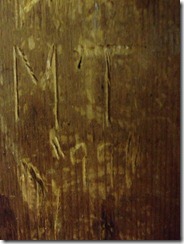 Mike’s Initials a beam in the kitchen from when he worked at Rizzo’s as a teenager. Now he owns the place!

While working there, Mike got his first cooking lesson “They taught me how to make Chicken Marsala,” said Tondorf. “I think I perfected it then, but I’ve had a lot of time to work on it,” he says with a smile. That Chicken Marsala recipe is one of the favorite dishes at Riva.

Mike’s career has been distinguished. He has worked at the Red Lion Inn in Cohasset. He worked with celebrity chef, Tony Ambrose, and with famous French chef, Emmanuel Dubois. At Bridgeman’s in Hull, Mike worked with Paul Wahlberg and was later recruited by Todd English to work at Olive’s. At Olive’s, Tondorf was the Chef Tournant, working under the Sous Chef. Mike also attended the New England Culinary Institute.

Tondorf learned a lot working with English, and was living the fast, exciting life common in the restaurant industry, especially in the city. This is where the road got bumpy. Tondorf developed a drug and alcohol addiction that took him out of the kitchen for three years. In an effort to solve the problem, he left Boston and worked in the suburbs with his dad, at a treatment facility for teens. The change of scenery was not enough to end the addiction, and Tondorf found himself in a rehabilitation center on Cape Cod, where he stayed for three months. He remains clean and sober to this day. “I have overcome an extreme obstacle in my life”, says Tondorf. “People put a lot of faith in ‘sober Mike.’ Jay, the man who sold me his restaurant, saw something in me. I can do whatever I set my mind to.”

And Chef Mike has his mind set on some very cool enhancements for Riva. “We are an Italian restaurant; – a high end bistro” says Tondorf, “and so we now make all our pasta from scratch. The Butternut Squash Raviolis are a huge hit, and they are made fresh in our restaurant, along with the mafaldine (wavy, ribbon-like pasta) from the Short Ribs.

“The menu items are creative yet classic. There is something for everyone to love. “I want to respect the people who have been coming to Riva since it opened, so we are not making drastic changes. We are simply improving on an already successful restaurant.” Where we really mix it up is in the specials”, say Tondorf. “Soon there will be three specials per night.”

The Tondorfs have expanded the wine list to include wines from several regions of Italy, Argentina, New Zealand, and the U.S. The staff is knowledgeable about the characteristics and subtleties of all wines available.

Riva has a new bartender, some new servers, and a new Sous Chef. Daniella, the legendary GM is still there, as well as the long time, crowd-favorite bartender, Griff. “For us, service is key”, says Tondorf. “Everyone is welcome; and we want to make sure they know it.”

What Tondorf likes best about working at Riva, and on the South Shore, is the sense of community among the chefs at all the restaurants. One would think that there is a fierce competition among all of us, but that’s just not the case. We are all doing what we love, and it’s great to share that with people”

2 Responses to "Get to know Mike Tondorf, Executive Chef and new owner of Riva in Scituate!"